yes, in all direction

yes, in all direction

This quadcopter is one of the advanced products of DJI company, which has become one of the favorite models of this company with its excellent imaging quality and advanced flight capabilities. The product has a high sales figure, and uses the latest technology of drones. Now Damzik, as a DJI representative in Iran, is trying to review other DJI products and publish complete product information.

In the construction of this helicopter, like the Phantom 4 Pro, solid materials have been used, which, of course, is not different from the Phantom 4 quadrotor in terms of design, but in terms of camera and flight capabilities, it has undergone changes, which we will examine in the following. Usually, every company launches several models from one version, for example, the Phantom family, in order to have variety in terms of price and quality, and with each update that it creates on its products, they usually improve their quality and efficiency. will do. DJI Phantom 4 Pro v2.0, like the previous series of this group, has an ideal design and a camera in the form of a pendant is installed under it, which is connected to the quadcopter using a mechanical and three-axis stabilizer. 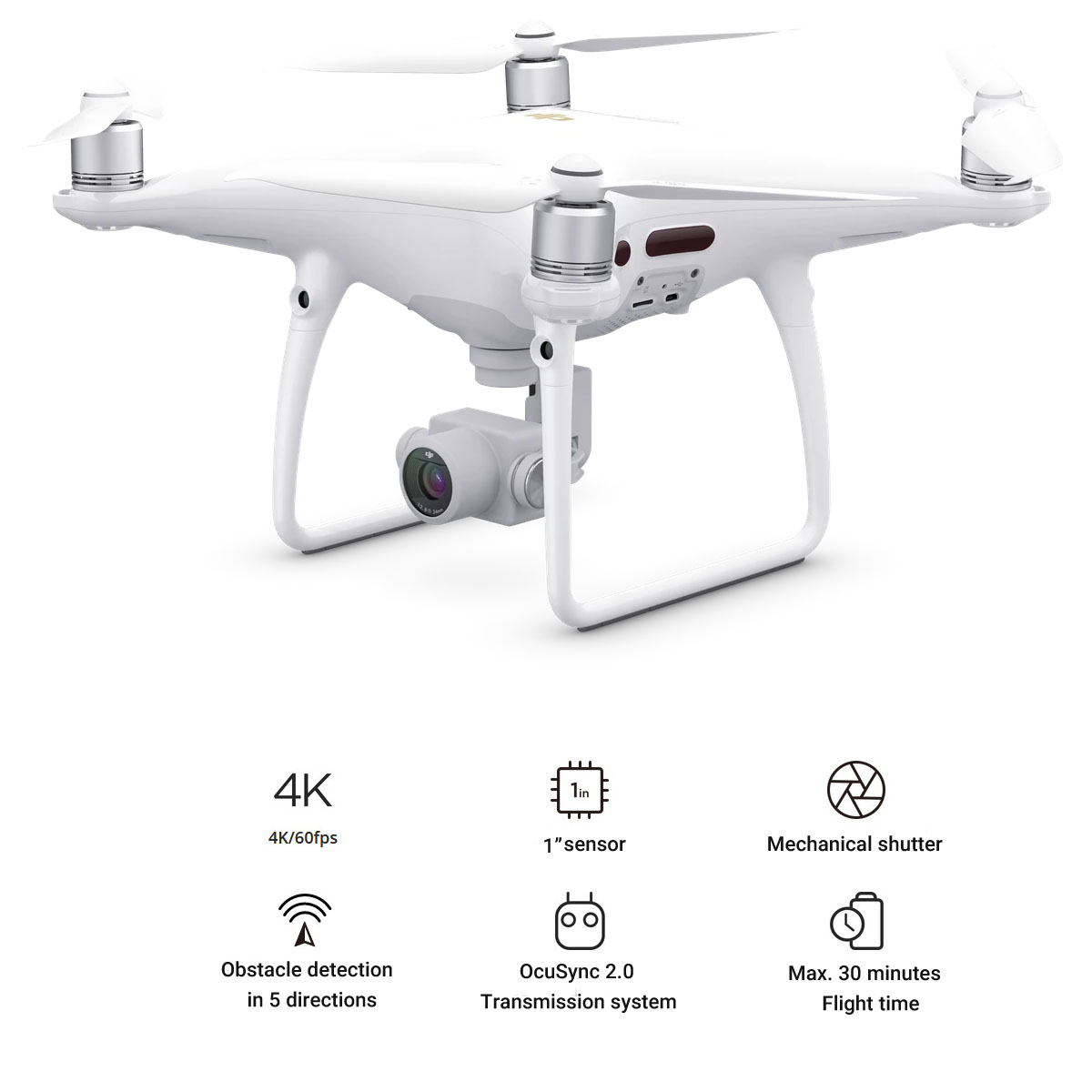 This phantom drone uses many features, the most important of which are obstruction sensors and vision eyes. Just as in driving, all drivers enjoy driving by dragging and pairing with obstacles and other vehicles, so when piloting, approaching obstacles and passing through them brings special excitement to the pilot. But without using a sensor to detect and avoid obstacles, this is not possible because you may see the bird collide with obstacles and break it with a little speed, but phantom 4 pro v2.0 has a system of non-collision with obstacles in 5 directions The main thing is that it is possible to fly close to the ground, the roof of a closed space and next to other obstacles.

For the Phantom, 9455S aerodynamic blades are used, which easily guide the bird into the sky with low noise and high power. These propellers are easy to install on four flying rotors and have a high efficiency, thickness and suitable weight, which causes less consumption and more power during flight.

The used camera will be able to capture professional images in 4K quality and 60 frames per second. Images and videos are processed at high speed, the camera has a bit rate of 100Mbps, which is a sign of a powerful lens. The camera lens has an F2.8 aperture that allows more light to enter the back of the lens, resulting in high-clarity and more detailed images. This 20-megapixel camera has a speed of 1 / 8000s, which makes the electric shutter open and close this camera a good option for filming sports matches, because with this high speed, it can move all the fast movements of a subject. Capture the animation with a high frame and prepare a professional display for you. The Phantom 4 pro v2.0 camera will also enable the ability to view recorded images and videos live, which will be made possible by the use of wireless technology. You can watch these uploaded files from the camera from a smartphone or display on the remote. The camera also has the ability to record PDFs that can capture images at 14 frames per second.

Flight continuity is another good feature of this guided bird, which is made possible by the use of a 4-cell lithium battery. But passing through the camera, the power supply of the quadcopter engines is the most important factor of an ideal flight. The drone battery has a capacity of 5870 mAh and provides a continuous flight of about 30 minutes on a single charge, which is suitable for recording long movies. The battery is smart and modular, which instructs the pilot to automatically return the phantom to its flight position when charging is reduced.

Advanced controller with a range of 7 km

The Phantom 4 Pro v2 remote control is a completely professional and ideal type that will transfer your commands to the quadcopter at a distance of 7 km with one touch. The Dji Phantom 4 pro v2.0 transmitter has a frequency of 2.4 GHz for control and a frequency of 5.8G for transmitting recorded images and videos instantly. The two antennas installed on the radio control allow the changes applied by the remote to be transmitted accurately and at high speed to its receiver on the multi-rotor. This remote control also has a holder or receiver of a smart device that you can install a phone or tablet between it, you can use its display to watch all the images and videos sent from the camera.

The Phantom 4 Pro v2 has reliable protection systems, the most important of which is the Global Positioning System GPS, which records all the coordinates of the route and take-off points in its memory during the flight and calls them by pressing the automatic return button. Fully automatically returns the bird to its place of flight. In this process, the GLoonas system has been helped to make this much more accurate and ideal. Other flight protection features include barometers that balance the pressure on both sides of the phantom 4 pro v2.0 to balance the bird.

Looking at the Phantom 4 Pro v2.0 quadcopter, this bird can be considered comparable to the Mavic 2 Pro because it has all the capabilities of a quality quadcopter. When it comes to recording videos at a uniform height, it is certainly a difficult task for you if you want to manually direct it on a uniform height circuit. phantom 4 pro v2.0 uses a height stabilization sensor or vision sensor that will allow the quadcopter to move at a fixed height.

This model from the Phantom family has the ability to avoid and avoid obstacles. And in this case, several smart eyes or sensors have been used to make the bird hit obstacles in all directions. The body of the quadcopter has several small but very smart lenses that will protect the bird from hitting obstacles in 5 directions. In return, there are infrared sensors that scan the right space on the right and left of the quadcopter with a viewing angle of 70 degrees, and using this feature, the drone can drop through all obstacles at high speed.

Ability to track the subject

This DJI drone has the ability to track the subject automatically, which is completely professional in tracking the subject you want. Of course, simultaneously with bird control, filming and video recording is a problem. In this case, the DJ company has helped you to use this feature to record images and videos regardless of how the bird moves.

The drone with features such as a 20-megapixel camera, 4K movies, more than 30 minutes of continuous flight, obstacle avoidance system is priced at 1699 euros. Customers who want to buy Phantom 4 Pro V2 can order this product from quaduae. Quaduae is the official representative of DJI drone in the UAE.