DJI has unveiled a new version of the Mavic Air 2 and introduced a new version of its the show multi-rotors. The Mavic Air 2 S is the first Mavic UAV to be equipped with a 5.4K camera. Although DJI is leaving the Mavic production line, the DJI Air 2 S is actually a continuation of the Mavic family of technologies such as folding design and 30-minute flights and 4K cameras, which in this model from mavic drones to 5.4K upgraded. quaduae as dji store dubai introduces Dji Air 2S. 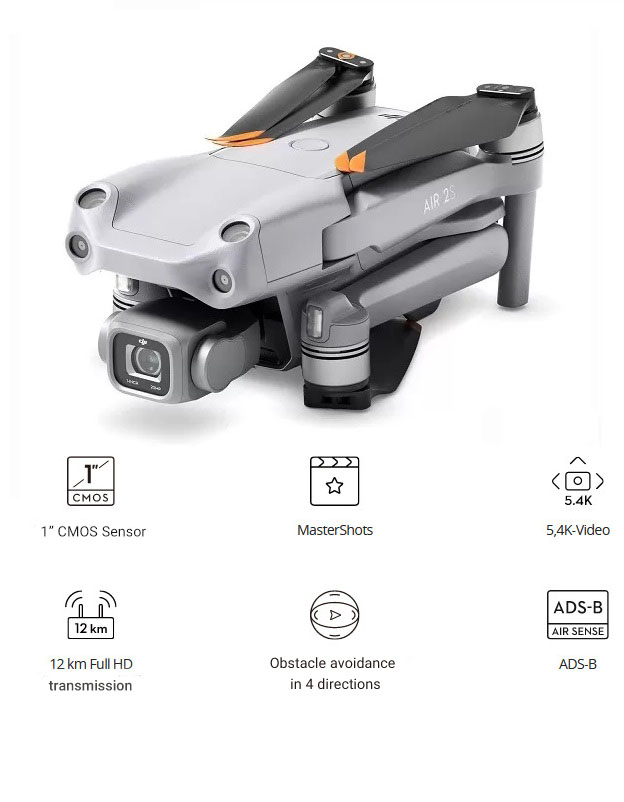 This is the second version of the DJI drone that has removed the mavic brand from its name. so it is esey to say that DJI is leaving the mavic production line.
But what is DJI’s goal in producing the mavic air 2 s? What features does the S version Mavic Air 2 release? In short, this quadcopter has been upgraded in several basic cases compared to its previous version, which is as follows. Using the 5.4K camera for more advanced video recording, its image transmission system receives videos and images taken from a distance of 12 km with the least latency.

First of all, we invite you to a brief comparison between the Air 2 S quadcopter and the size of its products. As you can see in the image below, DJI Air 2S is preparing to defeat the Mavic 2 Pro. It should be noted that the photo quality in Mavic Air 2 is equal to 48MP due to the panoramic photo. That is, it captures multiple images and then processes them together. But overall, the quality of the DJI Air 2 S with a 1 inch sensor is amazing. The Air 2 S quadcopter also has 5.4K video recording capability.

1-inch CMOS sensor with 64-megapixel images and movies up to 5.4K
Receive live images and videos from a distance of 12 km in HD quality
Ability to receive ADS-B waves or the same DJI AirSens system to identify adjacent aircraft
Ability to detect obstacles from 4 directions with advanced safety features
Automatic imaging capability
Half an hour of continuous flight with one battery charge
HDR, Log and Standard video profiles
MasterShots video recording modes

Since the Mavic 2 Pro quadcopter, the flagship of the Mavic DJI group in recent years, weighs almost 900 gram, but the Mavic Air 2 S with the same capabilities and, of course, more advanced features weighs less than 600 grams, which can carry and maintenance operations Make it easier. Also available in whitish gray with folding wings. The tip of the locusts is golden and one of the appearance features of this quadcopter which distinguishes it from its previous models. Another appearance of this multi-rotor is the sports LEDs that are installed on its landing bases and can double the attractiveness of flying at night. 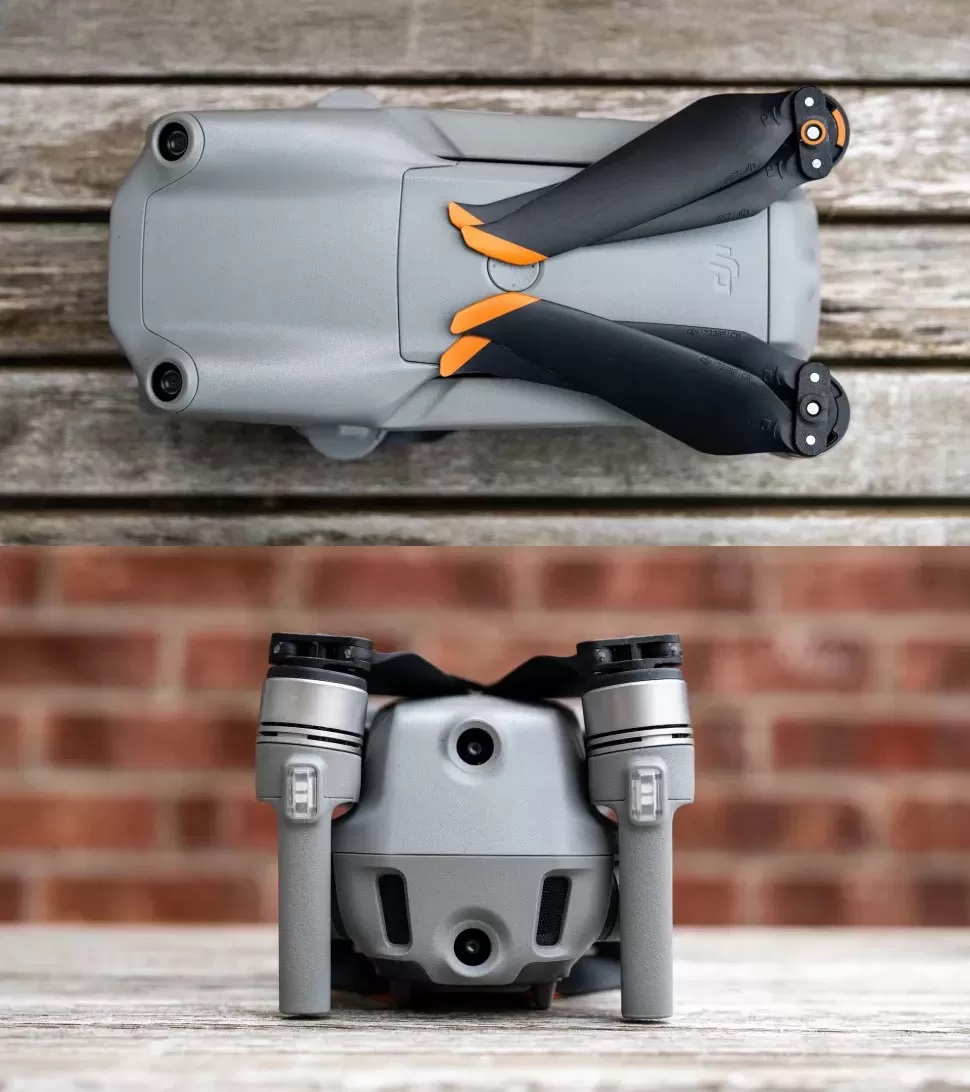 The camera has a viewing angle of 88 degrees, with a fixed aperture of F2.4 as expected, forcing many users who are sensitive to the brightness of the images to use ND filters to adjust the brightness of the images. The camera’s ISO rate is also applied automatically, although you can also select the camera’s ISO rate manually for videos and pictures. The aspect ratio is 3: 2 and 16: 9. Shooting modes include a 20-megapixel single shot, autofocus, burst shots, 2 to 60-second shots, and SmartPhoto, which includes HDR and Hyperlight. Mavic Air 2 S also includes panoramic images with several vertical, horizontal, 180 degree and Korean modes. And it supports 4 different video modes mentioned below.
5.4K | 24/25/30 fps
4K or HD | 24/25/30/48/55/60 fps
2.7K | 24/25/30/48/50/60 fps
FHD | 24/25/30/48/50/60/120 fps
It also uses H.264 and H.265 video codecs to record videos and images. The video formats of this camera are MOV and MP4 and the photo formats are JPEG and DNG (RAW). The camera bit rate is 150 Mbps.
The camera has a digital zoom feature that is different in each shooting mode. The equivalent size of a camera lens is 22 mm with a focal length of 60 cm to infinity.

There are a number of clever settings for this multi-rotor that can be used to make it easier for the operator to record videos and aerial images. MasterShots and Focus Track feature easily turn any adventure into a movie.

One of the new and of course interesting features of this camera quadcopter is the MasterShots feature, which is in fact the same Quick Shots available for the base model or the Mavic Mini 2 series, with which you could record attractive and amazing videos with a few simple clicks. This is an advanced smart feature that lets you take the best photos anywhere with just one tap. While ten different flight maneuvers are performed one after the other, all you have to do is select your subject and the quadcopter will shoot automatically. Focus on the remaining theme and a short film will be made automatically at the end.

The most important feature that makes the operator feel comfortable while flying is the safety of the UAV, which for it DJI is always looking for a way to take the safety of its birds to new levels to reduce damage. The Air 2 S is also equipped with a 4-way obstacle detection system that can detect obstacles from the top, bottom, front and rear. APAS 4.0 (Advanced Pilot System) algorithms have been further improved so that the DJI Air 2 S can actively avoid obstacles even in more complex, high-speed scenarios.

DJI has considered the most advanced OcuSync image transmission system, version 3.0, for this camera drone. To be able to receive images and videos for live viewing with less delay and from a distance. DJI Air 2 S has the most advanced image transfer technology (OcuSync 3.0) from DJI and offers a very smooth, clear and reliable image on every flight. The intelligent controller provided to guide the quadcopter has 4 antennas and receives up to 12 km of recorded videos with a quality of 1080 pixels. In fact, the image transmission system automatically switches between the 2.4GHz and 5.8GHz frequency bands to be able to use lower-density signals for flight control operations as well as receiving video and video from the camera.

Usually, all Mavic drones have a half-hour flight time, and the Air 2 S is no exception to this rule, and can provide half-hour flights using a lithium battery. The batteries for this multi-rotor are Lipo 3-cell with a capacity of 3500 mAh and a voltage of 11.55 volts. The battery alone makes up about 200 grams of the total weight of the DJI Air 2S. For longer flights and longer video recording, you can purchase an extra battery for your bird or purchase the Combo Air 2 S pack, which comes with more batteries and accessories.

But this product, like other DJI Mavic drones, is offered in two combos and standard packs. Its combo pack includes additional items such as 2 batteries, extra propellers, shoulder bag, ND filters, three-channel charger hub and other items. And as you can see in the image below, the Mavic Air 2S combo pack includes more accessories for easier flight. But to buy a DJI Air 2 S combo pack, you have to pay about $ 300 more. 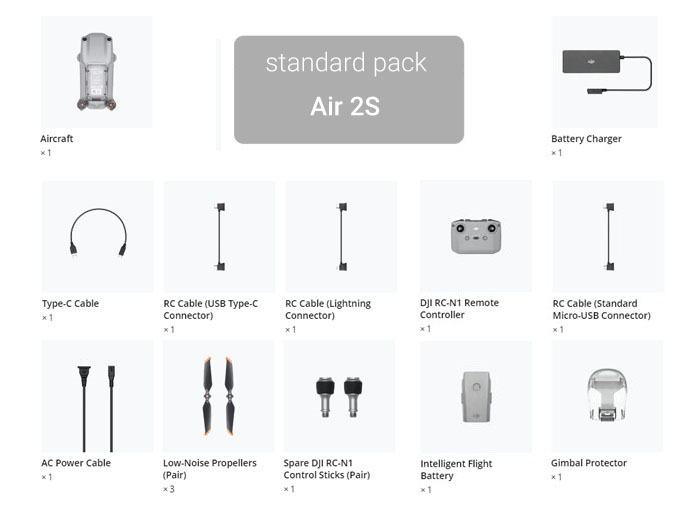 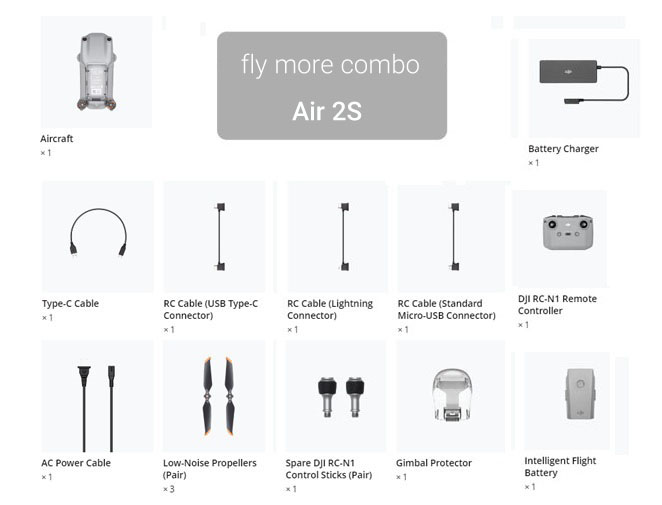 Surely the extra items that come in the combo package cost more than $ 300. The company has come up with a wide range of accessories for the Air 2 S to give users the most benefit. The original Mavic Air 2 S is priced at $ 999. To buy this product, refer to quaduae of dji dubai website.

Be the first to review “DJI Air 2S” Cancel reply