In the last days of October 2021, DJI introduced a new version of its professional camera, DJI Action 2. A camera that can record 4K movies at 120 frames per second. As before, it uses a different design and along with quality videos, compact design and compatibility with a wide range of accessories make this DJI camera a very popular action camera for cameramen.

The company has designed handheld and sports cameras under the name of osmo action cameras and DJI Action 2 is the latest product that the company has designed and marketed. This camera has unique features that have made it popular among users.
Following the admirable success of the dji in the construction of drone, has now shown a special performance in the field of action cameras, gimbals and other video equipment.
DJI Action 2 camera is waterproof and its 4K full frame quality can meet the needs of many users. The unique design of this camera has made it very easy to use and people can use it easily in different situations.

One of the differences between DJI Action 2 and previous versions is their appearance. The Action 2 camera is smaller and lacks a front display like the previous version. The body of this camera is made of aluminum alloy, which greatly reduces its weight. Action 2 weighs only 56 grams and its dimensions are 3.9 × 3.9 × 2.2 cm. 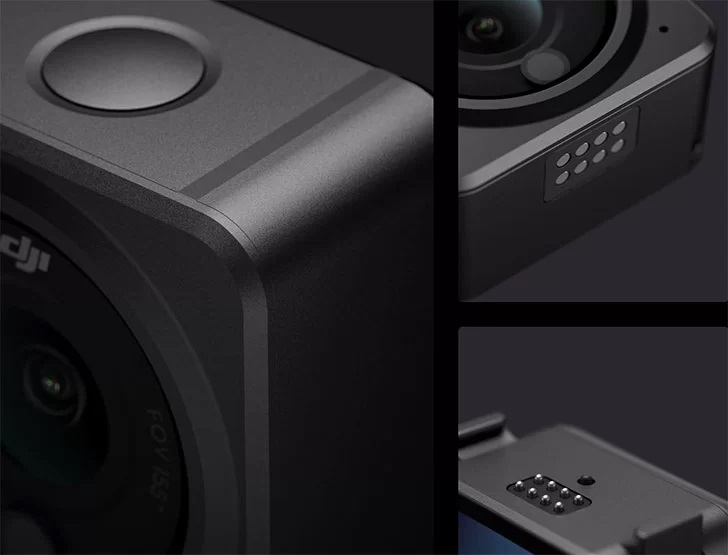 Another innovation that can be mentioned in the design of the Action 2 camera is the creative design of the magnetic lock of this camera, which allows users to install and replace accessories in the fastest possible time and very safely.

When buying a camera, what usually matters to users in the first place is the quality of the cameras. The better the quality of the camera, the more likely users are to buy it, because they can get better output. One of the features that increase the desire of users to buy Doreen Action 2 is its unique quality in video recording and clear images. The 4k quality of this camera with a maximum speed of 120 frames per second definitely meets the needs of most users, and in addition, the ultra-wide action 2 lens can provide users with a better field of view. It should be noted that the lens angle of this camera is 155 degrees.
With the help of this camera, in addition to recording 4K videos, you can record high quality images. The shooting quality of this camera is 12 megapixels and it can provide photos in both RAW and JPEG formats. 4x zoom capability when shooting and 2x zoom capability when shooting videos, as well as the ability to slow down videos up to 8x are other features of this professional camera.

A major problem with all cameras is the effect of camera shake on the film extracted from the camera, which reduces the sharpness and quality of the video. Sometimes it is not possible to avoid shaking the camera due to the type and environment of the video.
Companies active in the field of video equipment have designed internal stabilization systems to solve this problem. DJI has also used the internal stabilization algorithm in making Action 2. HorizonSteady keeps the video level constant, no matter how mobile the user is while filming, yet the internal vibration stabilization system is as neutral as possible and the output quality remains at its highest.

Your adventures are not always on earth, sometimes you need to pursue your adventures underwater. If you have the same intention, Action 2 is ready to accompany you. The waterproof capability of this camera up to a depth of 10 meters is another wonder of this camera that fascinates every user.
DJI Action 2, in addition to being waterproof, has a shockproof feature, which owes this feature to a screen made of unbreakable glass and a body made of aluminum alloy.

One of the photography techniques is the time lapse technique, which is exactly the opposite of slow motion. In this technique, the speed of movement of objects in the image is displayed faster than normal, and as a result, the possibility of observing minor changes such as the movement of clouds and the growth of plants is quite noticeable and visible. Action Camera 2 has this interesting feature and users can use it to unleash their creativity.
slow motion features
Another feature that the DJI Action 2 camera has is the slow motion feature. In this filming technique, the speed of the subjects is shown less than normal, and this reduction in speed is possible up to a maximum of 8 times.

The thing that most users’ minds think about is the screen mounted under the camera, which is not much different from the camera in appearance. This is an LCD touch screen module that has a magnetic lock and is very easy to install under the camera. But what is its use? The most important application of this module is the screen for easy taking selfies. Since Action 2, unlike the previous version, does not have a forward-facing screen, this screen has been considered so that users can use it as they wish and take selfies more accurately.
In addition, the Action 2 has a magnetic design that makes it significantly easier to install and replace camera accessories. The display module integrates with Action 2 and in many cases complements the camera. 4 stereo matrix microphones are used in the Action 2 camera and display module, which records all the sound in the environment with the best quality.
In this regard, the Audio Zoom feature was considered for this action camera, which also increases the video audio by zooming in on the video.

The Action 2 battery is a 3.85 volt, 580 mAh lithium battery with 1 cell. With a full charge of this battery, you can use Action 2 continuously for up to 70 minutes. Suitable temperature range for the operation of this battery is between 0 and 40 ° C and suitable temperature range for charging it is between 5 to 60 ° C.
But according to their tastes, users have also found flaws in this action camera, which they hope the DJI will try to improve. The most important problem for users is the limitation of the DJI Mimo program. In addition, the camera’s performance in the extreme heat is a little worrying. Another problem that users complain about is not using the microSD card slot in the camera main module.
Easily install Action 2 on your desired levels and record your desired videos with a maximum quality of 4K and 120 frames per second.
Visit the Quaduae store to buy DJI Action 2. from Quaduae offers all pre- and after-sales services to its customers.

Be the first to review “DJI Action 2” Cancel reply