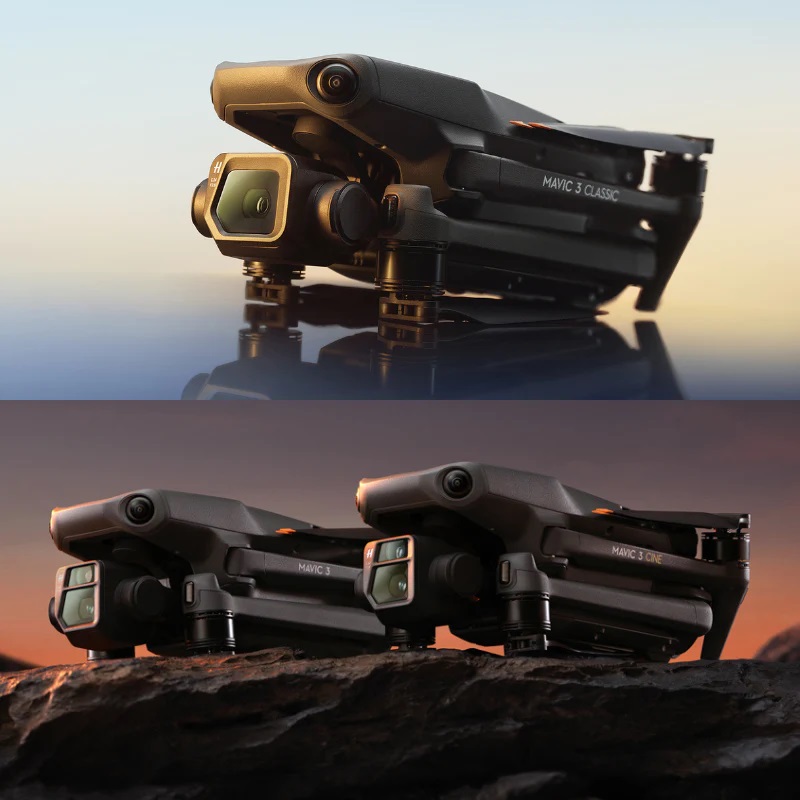 Unlike the previous products that DJI made changes in its drones in terms of camera, safety and flight time compared to the previous models, in this version there is no news of upgrading the camera or flight time. On the contrary, features were taken from it that reduced its price so that users can buy almost a Mavic 3 drone at a more affordable price. In this section, we want to examine the details of these two drones so that you will know more about the differences between these two drones.

Well, what is the difference between Mavic 3 and Mavic 3 classic? We notice at first glance that the telephoto camera that was on the Mavic 3 next to the main camera is now absent for the Mavic 3 Classic. Although the appearance of the drone has not changed in terms of dimensions and its weight is still 895 grams. Were features such as the telephoto camera, Apple ProRes HQ422 codec, which were removed for the classic Mavic 3, extra from the DJi’s point of view?

All three drones, the Mavic 3, Mavic 3 Cine and Mavic 3 Classic, are quality drones for filming, which come with key features such as a 4/3 CMOS sensor for 20MP imaging and 5.1K/50fps videos. All three cameras installed on these drones use a dynamic range of 12.8 stops, an adjustable aperture of F/2.8 to F/11, and a focal distance of 24 mm.

The cameras also share autofocus, more natural color flexibility in post-production with D-Log’s 10-bit color feature, and HLG capability to deliver higher dynamic range. Another interesting feature that can be seen is the Night Mode, which allows you to produce clear images by reducing noise in dark places. Although initially, Mavic 3 and Mavic 3 Cine did not have this feature, but with an update of the operating system, they have received the night mode mode.

In terms of flight time, both drones recorded 46 minutes. With parameters such as a speed of 32 km/h, flying in a windless environment and on the sea surface, and in 1080 pixel and 24 frames/s video recording mode. Of course, in the floating mode, the battery time will be reduced to 40 minutes, and both drones will have the same performance. Don’t forget that the battery of both drones is lithium type with a capacity of 5000 mAh and a voltage of 15.4 volts.

The all-round obstacle detection system is one of the other important features of Mavic 3 drones, and this time we are seeing an all-round system for detecting obstacles with the best quality. In general, 8 infrared sensors have been used in the body of the drone, which can detect obstacles up to a range of 25 meters with high accuracy. Along with the APAS 5.0 obstacle detection system, which is seen in all Mavic 3 drones, it helps to track the subject in all directions.

Both Mavic 3 and Mavic 3 Classic drones support three controllers DJI RC, DJI RC-PRO and DJI RC-N1. Since the price of each of these controllers is different, according to the control that comes with each drone, its price is different. For example, the Mavic 3 Classic without a remote comes at a price of $1,469. DJI RC-Pro remote control is not provided in any of the packages, you can only buy this controller separately.

Mavic 3 Classic uses the fully intelligent return function called Smart RTH, which, by activating it, the quadcopter will automatically choose a short and unobstructed route to return to its takeoff location. In this situation, you can also save battery charge. When returning home, it uses the all-round obstacle detection system to avoid obstacles and return home without encountering any obstacles. The observation system with several sensors in the front, back, top and bottom allows the drone to recognize the starting point of the flight in the shortest possible time and have a safe landing. It is also very stable when floating with its high accuracy in positioning, which is an important point for filming.

The O3+ video transmission system is one of the other common features of these two drones, which allows you to view the videos recorded with the camera live at the same moment with a stunning quality of 1080 pixels 24 frames per second. With this image transmission system, you can receive images and videos recorded with it up to a distance of 15 km from the camera. All controllers compatible with Mavic 3 Classic and Mavic 3 support dual signals of 2.4GHZ and 5.8GHZ.
Some users ask about the internal memory of the Mavic 3 Classic, but we must say that it is no different from the internal memory of the Mavic 3.

These are all the points that before buying a drone, if you are in doubt between the Mavic 3 series, they will surely clear your doubts to buy a drone that suits your needs.

As a DJI Store in Dubai, Quaduae is ready to deliver customer orders such as Mavic, Phantom, Inspire drones, Matrice industrial models, Ronin gimbals, Osmo sports cameras, Zenmuse and other DJI products at the best price.