10 basic problems of Mavic 3 that you should know

DJI Mavic 3 is one of the professional camera drones manufactured by DJI, which has sold many copies in the past year. Mavic 3 with advanced camera equipped with CMOS Micro 4/3 sensor is currently considered a very targeted choice for professional users. Looking at the technical specifications of this product, including the quality of the camera, flight time, safety, etc., it is praiseworthy, and it has appeared very successful in practice and has been able to gain the satisfaction of all users. But over the months we’ve been using the Mavic 3 for filming and flying, as well as user reports, we’ve noticed that there are some annoying bugs with this drone. In the following, we will discuss some of the Mavic 3 problems that you are likely to be dealing with. 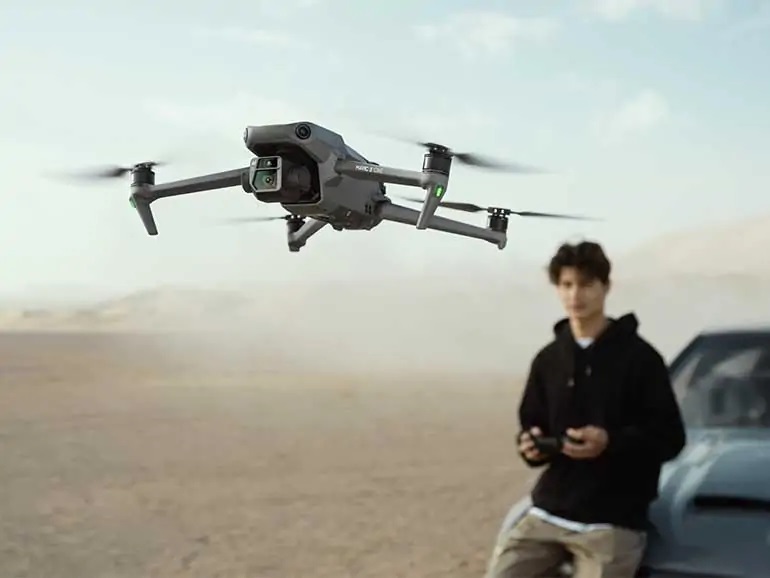 One of the main drawbacks of Mavic 3 is its high price. You have to pay a lot to buy the Mavic 3 drone and you have to pay three times as much as the DJI Mini 2 to buy this professional drone. Of course, it is not fair to compare these two drones. Mavic 3 performs better in terms of performance. In addition, Mavic 3 has features that you have to pay more to use. For example, Apple ProRes HQ422 movies, RC Pro Controller and 1 TB of storage are only offered with the Mavic 3 Cine, which is about twice the price of the original Mavic 3.
If we compare these two products in terms of technical specifications, the sensor size of the Mavic 3 camera is almost three times that of the Mavic 1, and in addition, the second camera has the ability to zoom 28 times. In terms of flight safety, we go from Mavic 1’s two-axis obstacle detection to Mavic 3’s omnidirectional obstacle detection, which is very valuable for a quadcopter with a camera. In addition, if we want to compare its flight time with Mavic 2 Pro, it has increased from 31 minutes to 46 minutes. In terms of speed and flight range, the ratio of three times has not been observed. However, it seems that DJI’s latest drone doesn’t offer everything that users have come to expect and doesn’t justify the price hike.

One of the features that have made DJI drones attractive in recent years is the wide range of accessories available for these quadcopters. But the accessories offered for the Movic 3 are expensive. However, if you want to get more out of it, you have to spend a lot of money to buy the necessary accessories. Of course, DJI offers its products in combo packages for more productivity, which include the necessary accessories such as extra batteries, extra propellers, etc. at a higher price. Although providing a wide range of accessories for a drone makes it more productive, but their high price is not bearable. For example, charging $319 for a Mavic 3 carrying case is not fair. However, all customers are satisfied with its quality.

3. Mavic 3 does not have a mechanical shutter

4. . The telephoto camera is not great

Most of the users when they read the specifications of the Mavic 3, seeing the telephoto camera, were excited to test it as soon as possible. But the performance of the telephoto camera was not as exciting as they thought. If it’s a unique feature for DJI’s flagship drone, it’s not commendable. Its quality is disappointing compared to the main camera. The telephoto camera is not from the famous Hasselblad brand. The camera sensor is not large, however, it cannot perform well in the dark.
The telephoto camera does not record in 5.1K Apple ProRes format. Worse, if you’re recording in low light it becomes much more difficult or even impossible.

5. Combo packaging is not suitable

DJI has always tried to market its drones in different packages. Mavic 3 also gives you this option to buy a professional drone with more accessories. But having more accessories may cost you more. For example, $2,629 for the DJI Mavic 3 Fly More Combo Pack is not fair. By purchasing this package, you will get a $319 carrying case along with the Mavic 3 along with a set of ND filters for $500, which may not be necessary for you. If DJI worked on their product packaging a bit, there might be better options to sell more versions of the Mavic 3. For example, if the Mavic 3 was offered with extra batteries and spare propellers, it would have a better chance of selling.

6. The remote control is not new

Although the user’s expectation from Mavic 3 has increased as much as the price has increased, DJI has performed poorly in many cases and failed to satisfy users. Among the problems that make users angry, we can mention the remote control of Moic 3. This is the same remote used for the $449 Mini 2. Although the Mavic 3 is compatible with the RC Pro remote control, you need to purchase the remote control separately to use it. Of course, there is another way, buying DJI Mavic 3 Cine. This remote does not have a screen to show some notifications and related settings.

Manufacturers always advise users in their manuals to follow the local rules for flying. But Moic 3 itself monitors this. That means you are not allowed to fly anywhere. For example, flying near the airport causes radio signal congestion and thus interference in the airport’s radio transmission system. But it is a bit difficult for professional users who have permission to fly in all regions. Because it is a lot of trouble to disable Mavic 3 Geofencing.

8. Some flight modes are not available

D-Log only in ISO 400-800
It is essential for a professional videographer to record his videos in D-LOG mode. And this is one of the features that was not available from the beginning, but a few weeks after the introduction of the Mavic 3, this feature was added to the DJI Fly app. D-Log adjusts the light and makes the photos you take in dark places with strong highlights capture more details than the default photos. But D-Log has a problem, and that is that you can only use D-Log in a specific ISO range, i.e. 400-800.

10. Mavic 3 does not support the second operator

To our surprise, the Mavic 3 does not support a second operator unlike its predecessor. Maybe this important feature will be available to users in future firmware updates. But for professional filming, an operator needs to control the camera and how to shoot the video. This is especially important when you want to film on a winding road while flying. We hope that this problem will be solved with an update and customer complaints will be less compared to Mavic 3. To buy DJI drone, visit the Quaduae store, the official representative of these products in Dubai.